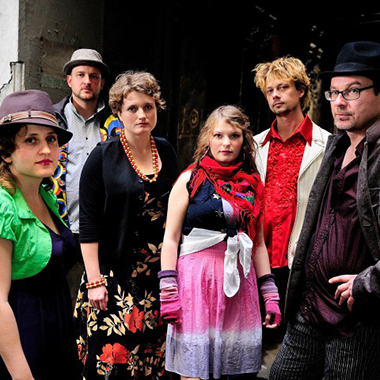 The Warsaw Village Band was found in 1997 as a response against the narrow-mindedness of the music scene which they believed was leading to the destruction of human dignity. That is why they turned to their roots in search for musical inspiration by “exploring the folklore and archaic sounds of their ancestors and instincts” (The Kennedy Center, US). In this sense, their interview from the Folk World is quite explanatory: ‘We travelled from village to village, seeking out the old people; we listened to their music and their stories. What surprised us most was that no one else in the villages is interested in this music anymore. These are old people, and when they die, the music will die with them.‘

The WVB made its first major spectacular performance in 1999 at the Sopot Festival on a stage it shared with world stars. JARO producer Ulrich Balss, who was represented at the festival with several artists, discovered this young band with the fourteen-year-old Maja Kleszcz on the cello. It was not until in the spring of 2003, however, that the second CD “People’s Spring” was released by JARO and the band could step on the ladder of fame.

Warsaw Village BandIn early 2004, they were presented with the BBC WORLD MUSIC AWARD 2004 in Edinburgh. In 2006, they won the Polish Grammy “Frederik Award”. Nowadays, Warsaw Village Band counts about 3 “Frederik Awards” in its arsenal. These distinctions were followed by composition commissions for video games and movie sound tracks, theatre productions and concerts all over the world. The British BBC honored the band with a sixty-minute portrait which has since been broadcast in several European countries. Their CDs were licensed in America and Japan, and the Warsaw Village Band is meanwhile the most successful Eastern European ensemble outside the mainstream. The New York Times once referred to them as one of the most important bands on the World music stage comprising “the sound of globalization!”.

Warsaw Village Band’s Style
Warsaw Village BandThe Warsaw Village Band is a symbol of young, intelligent Eastern European music which combines tradition with modern elements and is capable of eliciting enthusiastic responses from rock audiences and traditionalists alike. The Folk World Magazine described their style as: “based on the so-called white voice, a traditional vocal technique originating from the shepherds´shouts, always on the top of their voices. This is combined with the traditional techniques for playing the old Polish instruments.”. The Nordwest-Zeitung (Germany) referred to them in 2003 as: “One of the new promising New Folk Bands from Eastern Europe. WVB perform folk music combined with medieval music and a pinch of ‘Apocalyptica’[...]Violins sing, a cello is played by brute force, drums resound into the farthest corners.”. And the publication was right: WVB’s music has truly managed to establish itself in Europe and the world. In London, they were even spoken of, among other things, as the Polish Pogues. Likewise, the German review from Rheinische Post indicated: “The success of the Warsaw Village Band stems from its musicians’ great love for their national musical heritage and their will to preserve the old musical traditions. For these musicians, however, preservation does not mean restoration but – as we have experienced with ‘The Pogues’ or ‘Les Negresses Vertes’, for example – reanimation, i. e. the transportation of the old songs’ spirit into the here and now. Polka gets a shot of Techno, and despite the acoustic instrumentalization, the band conjures up sounds that have electronic impact.”

Warsaw Village Band’s Performance
In one of their gig reviews in Leeds at Courthouse it was stated that: “just listing the members of the band gives no real indication of the variety of sounds they produced, it was fantastic; three vocals singing alternately in unison and harmony; haunting melodies, electro-trickery, frantic percussion using all the above listed instruments[...]Get on their website, they are touring the world at the moment, see them, I defy you to tell me that they are not brilliant.”(Francis Denning). All these elements comprise their ‘hardcore folk’ style. In this sense, BBC 3 stated that WVB’s “ signature sound is indeed formed by uncompromising traditionalism, updated with a guttural punk rock aesthetic”.

The WVB had concerts in places as far-flung as Alaska, Japan, Taiwan, Portugal, Moscow and Paris reaping exuberant reviews from both the critics and the audience. All in all, they have managed to performance more than 500 concerts on four continents in more than 30 countries.

THE NEW YORK TIMES - “Traditional Polish songs, with their cutting vocals and meshed fiddles are the foundation of Warsaw Village Band’s repertory. But while their lineup is primarily acoustic – hand drums, hammered dilcimer, violins, cello – their sensibilities are modern. They hear dance -club drive and trancey echoes in the songs and they use recording studio techniques to heighten the central drones and eerie percussive sounds in their songs. Hints of reggae and guests like a scratching disc jockey should further infuriate purists”

WASHINGTON POST - “Poland’s Warsaw Village Band may be a folk music sextet, but that doesn’t mean it employs polite strumming and quaint melodies. Sunday evening on the Kennedy Center Millennium Stage, this three-woman, three-man ensemble used violins, dulcimer, cello, Polish frame drum, marching band-style baraban drum, and high-pitched vocals to showcase the unique, raw style they referred to as Polish “roots music from the ancient to the future.”
With the women upfront and the guys in back, the group featured songs from their two recent albums, “People’s Spring” and “Uprooting.” Although the one-hour set was often dominated by noisy waves of rhythmic bowing from the two violin players, their string work frequently lacked melodic variety. But the other instruments, and especially the haunting female vocals, took up the slack.”

FOLKWORLD - “A very mature work with lots of energy. Another proof that we should have a closer look towards the Polish scene.”

ROOTSWORLD - “Proud, inquiring, revolutionary, masterly performed, imbued with a youthful enthusiasm that revitalizes you on every listen and manifests why it still means something to be searching for music all over the land, instead of being content to listen to mainstream pop.” 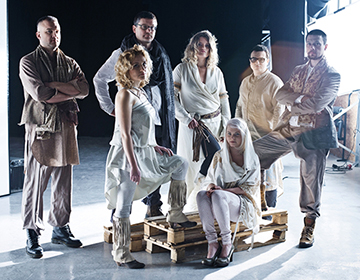 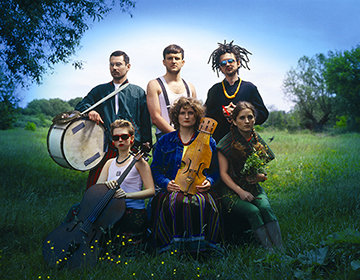 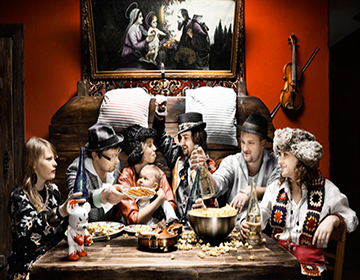 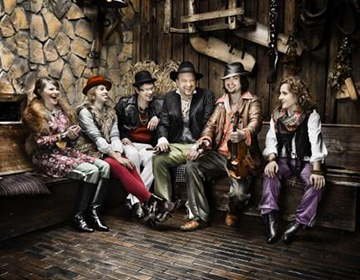