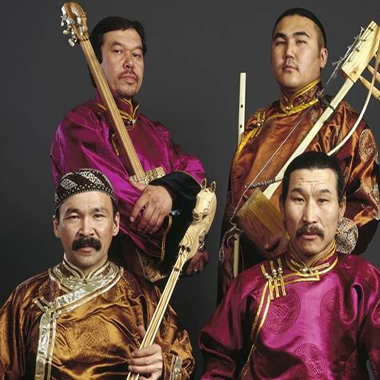 In 1992, Huun-Huur-Tu was founded by Sasha Bapa, his brother, Sayan, and two other musicians, Kaigal-ool Khovalyg and Albert Kuvezin. Ever since they have tried to focus on the performance of “old and forgotten songs”, as Sasha put it. Sasha, Sayan, and Kaigal-ool were refugees of one of the large state-managed song and dance ensembles that became fixed institutions of the public cultural life during the Soviet era. For decades these ensembles with their glitzy performances of folk music or pseudo folk music offered the only possibility for young musicians to play indigenous music for a living. Throughout the privatization of the music business in the former Soviet Union, many musicians decided to abandon these state ensembles and form their own groups. The musical results have decidedly been mixed.

In an interview for the American producer and critic, Ted Levin, Sasha Bapa explained the meaning of ‘Huun-Huur-Tu’ as the vertical separation of light rays that one often see out on the grasslands just after sunrise or just before sunset. It seems to be a metaphor for the band’s key element– throat-singing that “consists of producing a deep tone in such a way as to create one or two substantial harmonics. The first harmonic is a humming sound in the mid-range, and on top is a loud whistling tone that the singer raises and lowers to create a weird sort of melody by varying the embouchure” (Jon Sobel, Blogcritics Magazine). In this light and through their heavy touring, Huur-Tu can truly be seen as a leading force in popularizing throat singing or khöömei the past decades.

However rooted in Tuvan traditions, it would be a mistake to attribute Huun-Huur-Tu to a folk ensemble. For the first time, Huun-Huur-Tu laced in the pop charts with a remix of the title “Eki Attar”. It became Greece’s No.1 hit in the summer of 2002. The ensemble then went on to release a studio project entitled ‘Spirits of Tuva’ with Djs of various nationalities. They have performed with Ry Cooder, Frank Zappa, The Chieftains, Johnny “Guitar” Watson, Kronos Quartet and L. Shankar among the others. The ensemble’s collaborations do also include other members of JARO: Hazmat Modine, The Bulgarian Voices– Angelite, and Moscow Art Trio.

Huun-Huur-Tu’s Style
Huun-Huur-Tu’s style could be best described as profoundly mysterious. This comes as a consequence of their traditional, ritual laryngeal chants descending from Central Asian land of Tuva. This unique song technique reside on developing an enthralling sound cosmos rich in undertones and overtones.

The members of Huun-Huur-Tu have devoted themselves to learning oId songs and tunes, but at the same time their performances reflect the values of globalization. The whistling of the high-mountain wind forms eerie overtones and postmodern statement. The repeated thrum of a string against wood and hide turns into a meditative, evocative figure straight from the avant-garde. The descendants of isolated Siberian herdsmen make serious, strangely universal music out of some of the planets quirkiest acoustics.

Huun-Huur-Tu’s Performance
As they began touring in the West, Huun Huur Tu almost single-handedly introduced the outside world to the boundless wealth of Tuvan traditions, thanks in great part to their superior musicianship. Hailing from the high pastures of the Altai Mountains in south central Siberia, the musicians have spent decades honing the overtone singing, instrumental approaches, and vibrant songs of their home.

Steeped in Tuvan folklore, the ensemble wears traditional garb and accompanies themselves on string and percussion instruments, playing galloping rhythms that evoke the vast south Siberian steppe. Their tightly structured pieces often imitate natural sounds, so that a song can be a literal representation of a Tuvan landscape.

Jon Sobel of the Blogcritics Magazine characterized the ensemble’s live performance as: “[...] the music is as warmly human as any folk style, and it’s not all khoomei. The four men have six or seven very distinct singing voices among them. Accompanying themselves on plucked and bowed stringed instruments, percussion, and jaw harps, they emulate biological rhythms in song: heartbeats, breathing, a brain drifting in dreamland, and not least (for a nomadic people), a horse’s trot. The songs are about romantic love, love of place, and (not least) horses, with moods that range from lyrical and thoughtful to joyful, humorous and danceable.” In this sense, the San Francisco Bay Guardian concluded that the Tuvan show: “will ride into your brain and leave hoof-prints up and down your spine.”

THE SAN FRANCISCO BAY GUARDIAN - "The Tuvans will ride into your brain and leave hoofprints up and down your spine."

JAZZ TIMES - "A rustic joyousness and unadulterated expressiveness come out of these musicians."

THE CHICAGO TRIBUNE - "It is unfamiliar yet very accessible, an other-worldly but deeply spiritual music that is rooted in the sounds of nature."

LOS ANGELES TIMES - "When a Tuvan sings praises of mother and country, which is what a Tuvan usually sings, he often does it in three-part harmony. By himself."

UNION NEWS - "Imagine cool, fresh air, high altitudes, the wild open spaces of the steppes, rushing rivers, singing birds, galloping horses, yurts, and a culture that combines Buddhism with shamanism, and then imagine that you hear the sounds of all these elements in the music. With a beat. That's what it sounds like."

THE GAZETTE (Montreal - Feb.99) - "The sound is peculiar, haunting, hypnotic. It is a guttural, sometimes piercing sound of vocal chords burrowing into the flesh of mother nature. It is wind and rushing water and crumbling earth, it is called throat singing and masters of the technique are headed our way..."

THE OREGONIAN (Portland OR - Feb.19, 99) - "The members of Huun-Huur-Tu are perhaps the best known practitioners (of throat singing) and accompany themselves on all manner of strange and wonderful instruments... The resulting sound is as compelling as a wild gallop across the steppes."

METRO TIMES (Detroit MI - Feb.3, 99) - "Throat-singing Cowpokes... Who are the real cowboys? If you ask a typical Tuvan, they'd tell you that cowboys are from the Wild, Wild East. East? From the tiny central Asian republic of Tuva comes a quartet of the world's most renowned musical renegades... The group is also Tuva's unofficial cultural ambassador, sharing with the world the unusual musical traditions from their small patch of land nestled between Siberia and Mongolia..."

BACKBEAT (Denver westworld.com - Nov. 97) - "The juxtaposition of [Angelite]’s ecstatic, deeply felt wailing and the bottomless pitch of the Throat Singers..., produces so wonderful a sound that their pairing seems inevitable."

DIRTY LINEN (Jan. 97) - "This music is both very spiritual and down to earth, grounded in a strong sense of place, yet its appeal is universal. The group bridges the gap between old and new like few others."

TUCSON WEEKLY (Jan. 97) - "In the case of Huun-Huur-Tu...the art of imitation is rooted in a centuries-old world view of music as an offering, as opposed to the commercial vehicle catering to the least common denominator we've come to expect. The end result is a strange, beautiful tapestry of sound and rhythm that taps into something more real, more authentic, than anything you'll likely find on the American musical landscape."

THE WASHINGTON POST (Jan. 96) - "...Between verse come sounds that seem unlikely for either voice or string. They are high and whistling, like bird calls. Sometimes they are croaking, down toward the nether reaches of detectable pitch. Sometimes they have a pulsing, rolling quality sustained for lung-aching duration, sounds that seem to capture the essence of ever-flowing water and ever-blowing wind."

CMJ NEW MUSIC REPORT (Feb. 95) - "Huun-Huur-Tu presents the style in the context of wonderfully tuneful songs..., using instruments (igil, byzaanchi) reminiscent of banjo and fiddle. But the combination of low growling and highpitched harmonics, along with the less-than-commonplace khomuz and dazhaanning khavy make these songs particularly jawdropping."

JAZZ THING- ”[…] an amazing work of harmonical unity and beauty.“

BNN - “Infatuating and enchanting, abysmal and magical the throat singing sometimes comprises four octaves – the love songs of the larynx acrobats from Tuva have the acoustical depth of a cathedral.”

TIROLER TAGESZEITUNG - “They convince by a wonderful combination of meditative sounds and ecstatic rhythms.”

KARLSRUHE KURIER - ”The throat singing tradition from Tuva develops an archaic fascination from which you can hardly withdraw.“ Karlsruhe Kurier.”

NATUR - “The longer you listen to the vocal caprioles, the more fascinating becomes this acrobatic onomatopoeia.” 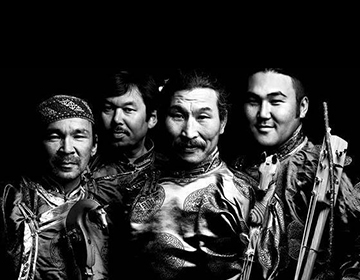 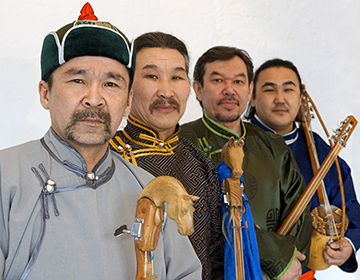 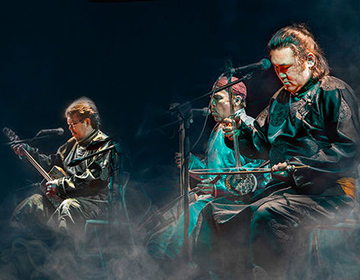 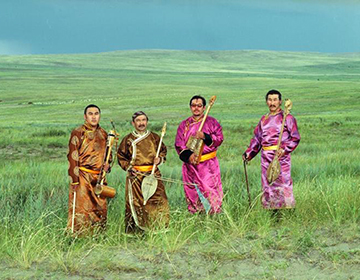