On 2012, two maverick groups, Britain’s eclectic Transglobal Underground and Albanian brass maestros Fanfara Tirana, team up for a dynamic cross-border, cross-cultural jamboree. Drawing on a Tom Tiddler’s ground of musical treasures, Balkan and otherwise, they exchange ideas, melodies and lyrics to tell new tales of mystery and re-imagination in a sparkling celebration of life, love and solidarity with its roots in history and its sights on the future.

Fanfara Tirana is surely one of the most entertaining brass band coming from the Balkans. Formed on 2002 by a group of friends from the Albanian Army band who decided, in a light-hearted fashion, that it might be worthwhile to form such a band, just to see what might happen. They contacted veteran singer M° Hysni Zela and persuaded him to come out of retirement and join them, which is when the serious fun started. Taking the time-honoured tales of heroes and lovers that are the backbone of the Albanian tradition and infusing them with the pumping rhythms of the best Balkan brass styles, they have created something truly innovative yet totally representative. Already blazing new trails at home and now ready for export.

Their latest album, released by Piranha, climbed higher and higher the World Music Charts Europe for months, but with their new studio work Fanfara Tirana has gone further on and delivered the whole album to the londoners manipulators, the brilliant minds of TransGlobal Underground, a band that built up their music from the idea of crossing borders, or better, following the philosophy that there are NO borders at all.
TGU are well known for being very keen at mixing musical styles and rythms taking no care at all about music genres or barriers created either by technology or common sense.
In the years they've been overexposed as well as niche market, although they kept being very influent. They made a rule out of “mash up”, mixing all kind of music and sounds, brave pathfinders, always a step ahead innovating the music scene.
The music composed by TransGlobal Underground can be seen as a kaleidoscopic trip through rituals, secrets with sudden, joyful swerves intheir tunes. Their aim is to enhance the deepest groove, looking for the red thread crossing different sensibilities and connecting their music to the multy-faceted universe of world music.
The result is a blast! Ideas travelling back from London to Tirana forced the albanian musicians to go back to the recording studio with a new vision, fresh ideas and many expectations.
Two very different bands got together, the contamination already took place, and the results could be the rise (being a bit pretentious) of a new music reality.
Southern albanian kaba meets reggae, drums meet electronic, the voice of the albanian folk idol M° Hysni Niko Zela meets Tuup's black soul.
Sitar strings embrace Iso-polyphony from the eagles nation and the results is astounding.
Fanfara Tirana & TransGlobal Underground decided to get together for a European Tour in 2013.
It's a perfect match. Symbiotic.

The project developed further into a new one, more compact and more flexible getting the name of the album, Kabatronics composed by 4 musicians per band and they are recording their new album to be released in spring 2016.

If you're up to dance two hours in a row look for their next live show, you won't regret it!

fROOTS (UK) ***** - "Yes i knew it was going to be good, but perhaps not this good. Kabatronics is a proper album like wot they used to make: diverse, consistent, well produced and with a whole that’s greater than its many impressive parts."

SONGLINES (UK) - Fanfara Tirana could stun a badger at 50 paces. Otherworldly sound of pealing clarinets over flugelhorn, saxes and trumpets, and the strangeness of their rough, gruff harmony vocals. Kabatronics is a winner 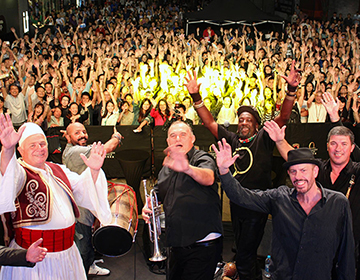 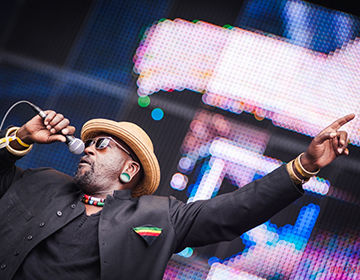 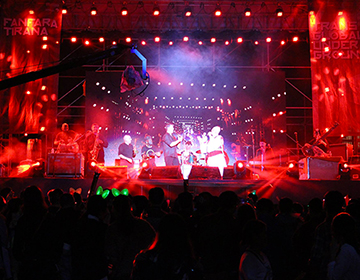 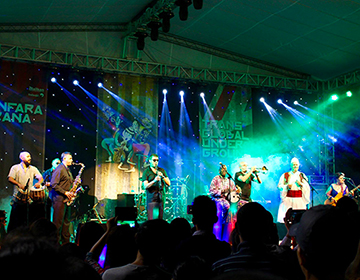